Tuning a Citroen Saxo when it's over the top crazy!

Have had the pleasure of following Jan's Citroen Saxo for some years - It has been continuously redone and he can not get enough of power - Will he ever be satisfied? :)

In the year 2013, Qualitec built Vem's motor control on Jan's Saxo, it was made with new wiring so everything was new and you did not have to worry about some bad wiring in the engine compartment. The car had fitted a smaller T25 turbo which gave about 235 hp. as I recall. Then it has a larger turbo mounted, something similar to a GT2871 where he was again about to get it driven in - Here with 260 hp. 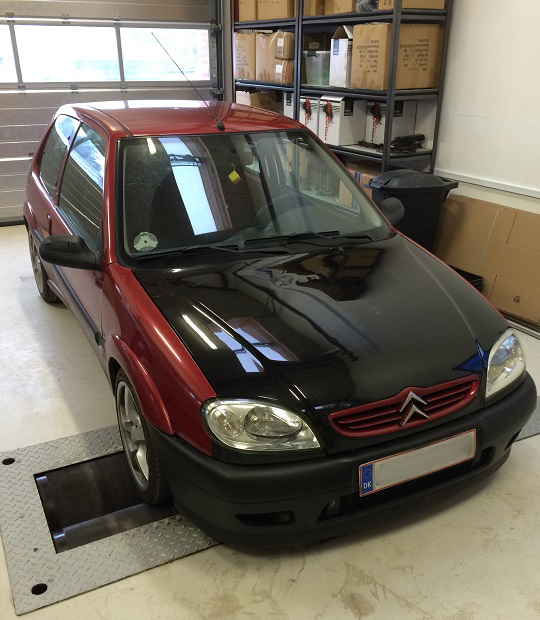 As you can see in the picture above, it is certainly not a car you would think has 416 hp. They had actually talked about throwing the engine in a Balingo :)

When Jan from Frydendals Auto called me at the beginning of January 2015, I must admit that I had to ask a few times if it was really 2.7 bar charging pressure he said he was driving with - and then I thought: He is crazy ..! But we agreed he should come by to get it adjusted and run in properly on the dyno. He then had to cancel the Friday we had agreed on when the top piece had become bad... But it did not take long before Jan had fitted a new top piece and he came over on Thursday the 12th of February.

Jan comes from Zealand so it is of course a long trip - But amazingly enough, Jan and his apprentice drove from Zealand in the Saxo - Yes - Without a car trailer! But we got a cup of coffee and talked a bit about the car, then we strapped it on the dyno and connected the computer to the engine management. I must admit that I was and still am somewhat surprised that it had been able to run with so much charge pressure as the engine management was not set up at all to be able to run with so much charge pressure. I got the data corrected and was able to start scrolling a bit on it. I quickly got the ignition and fuel to fit well and with the new setup I made it run with 2.3 bar charge pressure - and when we took a measurement on it it made the whole 416.6 hp and 497, 4 nm. with a pretty nice power curve - It's cool!

With this charging pressure, it makes the wheel spin-in 3rd gear at 160-170 km / h. It was fitted here with a larger T4 turbo where they themselves have made a turbo manifold etc.

But of course, Jan was not satisfied so he wanted to go further up in pressure - But the status is that the nozzles were used with 92% and then one drive shaft started to get worse, so we had to stop for this time - But also thought it was a really nice result. However, I am sure that Jan will come again with a new and larger turbo, larger nozzles, and what else needs to be done for it to make even more hp. It's going to be fun to see him at DHB when he gets there!

A Turbosmart charge pressure control was fitted which, however, was disconnected so that the watch only showed the charge pressure - We used Vems motor control to adjust the charge pressure electronically. A Methanol injection system with a nozzle for 500 hp is also fitted. 2.5-inch stainless steel exhaust with middle pot and the rear pot has been made with a VUSS valve for extra good flow. T3T4 Turbo for 480 hp. 38mm. external wastegate with free exhaust. 630cc. petrol nozzles and 500hp. Wallbro in-tank petrol pump. Homemade intake manifold with universal 70mm. throttle. The engine is a TU4JP5 1600cc. with Wossner forged pistons and PEC H-profile connecting rods. 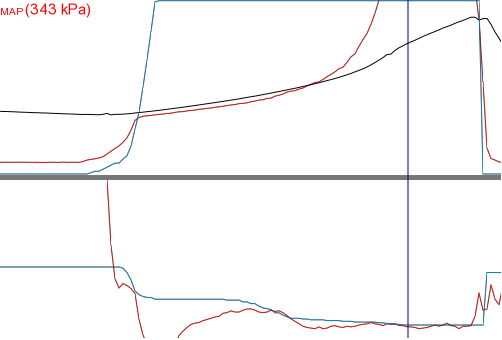 Above you see a picture of Vems tune where it is at 2.43 bar charging pressure